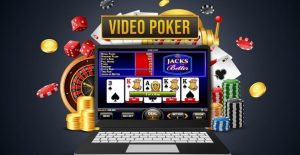 Video Poker has more in common with slots than Poker. Which is apt: the first mechanical slot machines in the 19th Century used 50 Poker cards on the reels, not fruit symbols as many believe. The Video Poker games now found in abundance at online and mobile casinos combine slot-like features with computer technology and video games.

Video Poker requires only one bet per game. Five cards are dealt by a random number generator, and the player gets one chance to discard as many as they like, followed by one draw, which ends the game. The object is to make Poker combinations of two Jacks or better, and wins are paid in fixed multiples of the bet according to a pay table.

Start Off With The Pay Table

Like any game run by RNG, Video Poker is largely a matter of luck. If you have the bankroll for extended play at low stakes, you’ve a better chance of occasionally hitting worthwhile wins. But there are strategies that can boost your chances.

Check out the variants available. Jacks or Better is the most common type, but some versions pay less on certain combinations than others. Titles that pay 6:1 for a Flush and 9:1 for a Full House, on a 3-credit bet, have the best payouts generally, so whichever title you choose should show these odds on the pay table.

Aces and Faces is another good variant: Four of a Kind in face cards wins 40:1 on a 1-credit bet, while four Aces earn 80:1. The usual win is 25:1, so cherry-picking the right game will maximise your returns whenever fortune does land in your lap.

Players can bet between 1 and 5 credits, with prizes increasing in proportion. The exception is the Royal Flush; a very rare win to begin with. A Royal Flush on a 1 credit bet nets 250. But play 5 credits, and instead of rising to 1,250, it pays 4,000 credits.

That’s why you should always play 5 credits. if you’re conserving your bankroll, rather adjust the denomination than the number of credits.

Knowing which cards to hold is crucial. Video Poker is played with a 52 card deck, so you can study the odds of making each winning hand from any selection of held cards, and draw accordingly. Or you can go an easier route and consult a table that ranks which combinations to hold in any given hand.

Several sites offer ranking tables and teach Video Poker strategy. You should not draw any cards on a natural Full House or better, for example. If you don’t have one of those, check if you perhaps have 4 of the 5 cards you need for a Royal Flush.

There are 16 clear rankings in this sequence, however, so they’re hard to remember. But since you can play online at your own pace, don’t be scared to pause, consult your table, and then hold the cards that give you the strongest chance of winning.